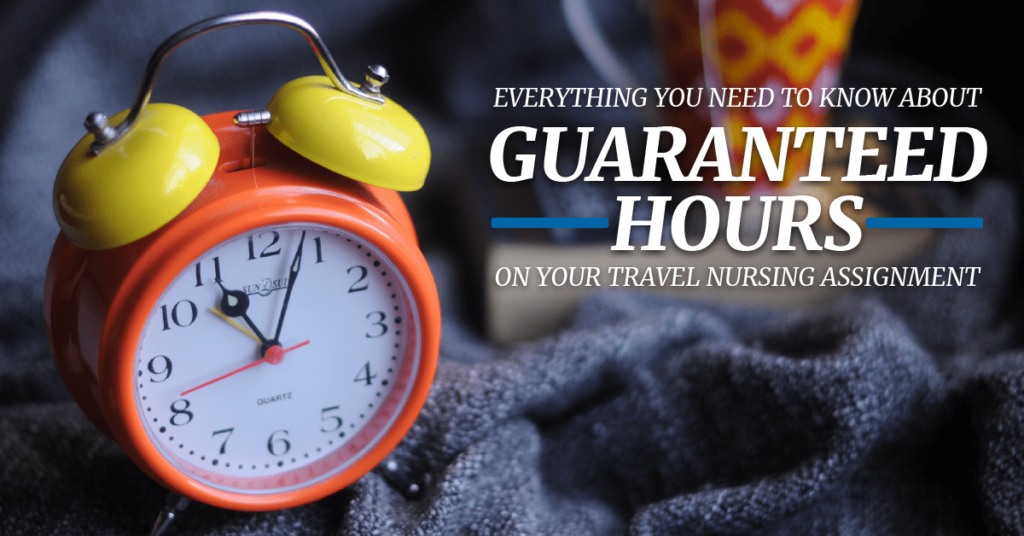 What does guaranteed hours mean?

While you might think that the definition of “guaranteed hours” is obvious, it doesn’t mean that you’ll get paid for all of the hours you’re contracted for regardless of the circumstances, or all hours other than for shifts that you’ve called in ill, or miss a shift your scheduled for any other reason. Essentially, you are guaranteed a minimum number of working hours. If you’re called out for low census, for example, and cancelled more than the minimum allows for, you’ll still be paid.

So, while there are some nuances to this, in general, if you sign a standard travel nursing contract for 13 weeks, with 36 hours each week guaranteed for 468 hours total and the hospital schedules you for fewer hours than that, you should get paid for the shortfall.

The guaranteed hours protect both you, the traveler, and the agency, as the agency provides a service to the facility, relying on all of those hours being worked in order to cover the many different costs that are involved, such as your travel expenses to get there and your housing. The agency has to cover all of that, which means they need to be able to bill the facility for those hours. If you don’t work the hours, the agency won’t get that money and neither will you, so it covers both parties.

Who guarantees the hours?

The travel nursing agency you’re contracting with is ultimately the party that guarantees your hours, as they’re also responsible for paying you. Most of the time, however, the facility offers a guarantee to the agency that they’ll provide the travel nurse with a minimum number of hours. While the agency is responsible to you for living up to their side of the agreement, the guarantee the hospital gives the agency makes it doable financially.

Get travel job information from the top travel nursing companies

Are there different types of guaranteed hours policies?

Guaranteed travel nursing hours policies can and do differ. Some guarantee every hour, while others allow the hospital to cancel up to a certain number of shifts within the typical 13-week period of an assignment. Keep in mind that if you volunteer to leave early, this is rarely if ever covered – even if the supervisor asks you due to low census. Another possible scenario is that you’ll be given the option to cancel a scheduled shift and offered a future shift to make up for the missed one. If you decline that, the shift that was cancelled won’t be part of the hour guarantee. Finally, in some cases, you may be asked to float between different facilities in order to get your guaranteed hours – if you decline, again, those hours missed won’t be paid.

Bottom line? Speak to your recruiter and thoroughly read your contract

Never assume that the policy will be the same when you’re going to work at a new facility, it’s always important to ask your recruiter what the policy is.

It’s easy to see that the term “guaranteed hours” can be a little more complicated than what you might think. If this is something that’s important to you, it’s a must to ask and learn as much as you can about the agency’s policy as well as the policy of the facility you’ll be working in. In some cases, you might find that the facility doesn’t guarantee hours, but the agency does, perhaps with a clause that you’ll need to float to other area facilities they’re contracted with.